DADA and Collage and Photomontage 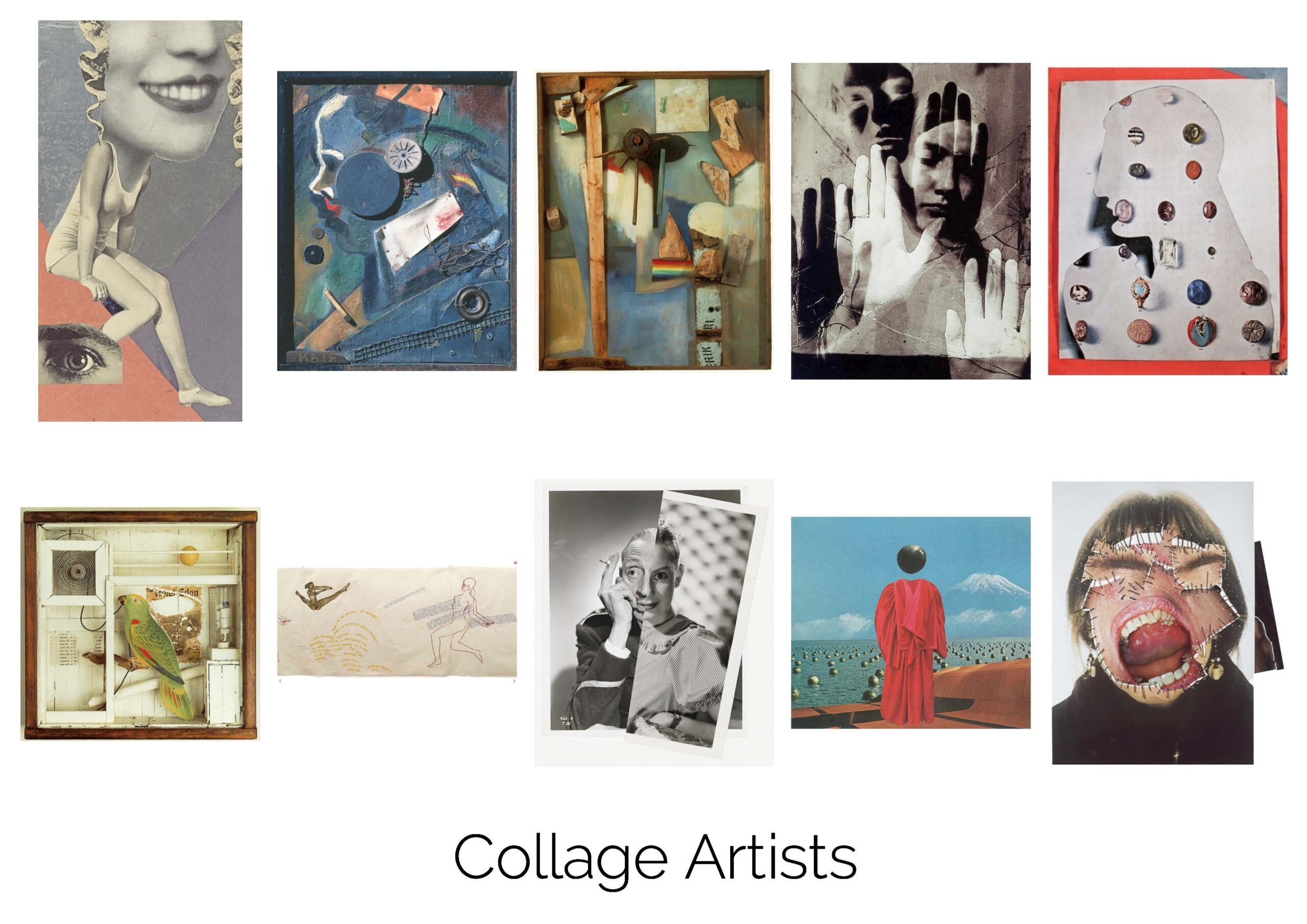 Artists who specalise in collage

I looked up this phrase on google as a starting point and it gave me some familiar names like Hannah Höch and Man Ray, I fount a list that the online art magazine AnOther classified as the top 10 collage artists which looked like a great place to start researching practitioners. The list was as follows:

I was fortunate to visit the Hannah Höch exhibition in the Whitechapel Gallery in 2014 with some friends from the TV Group at the time one of the other members wanted to see it as it was relevant to a level 1 module he was doing at the time, little did I realise how useful that first hand experience would be in 2020 six years later. 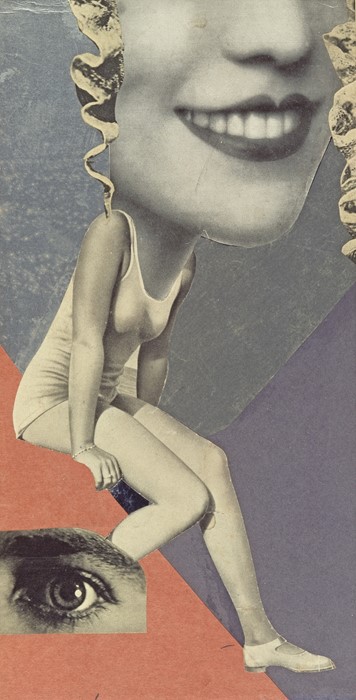 Hannah Höch was a practitioner of Dadaism during the Weimar Republic and on into the early twentieth century. Her work challenges the racist and sexist codes upholding Weimar Germany and she continued to challenge the place marginalised women in twentieth-century Germany.

I remember the work at the Whitehall gallery being quite hard-hitting with black people being portrayed as gorillas, at the time I did not understand her work and found those images to be disturbing as they would have been entirely unacceptable today. On reading a bit more on her, I discovered that she was an outspoken critic of these kinds of attitudes and that her work was more aimed at taking down an establishment that fostered inequality.

On a practical note, her style of collage is technically quite viable for what I have in mind, although I think the feminist in her would shudder at the fantasy genera supported by Boris Vallejo the idea of mixing the two ideologies in a piece of work amuses the mischevious side of me that as a man reacts badly to the more hard-line and radical side of feminism that seeks to turn the tables through 180 degrees rather than level the playing field which I totally support.

Hannah Höch’s method does, however, require some study as it does fit the idea if not the ideology, Throughout her work she finds images and cuts the relevant parts to combine and create a kind of Frankenstein’s monster. I am envisioning the idea for creating a fantasy image using a similar technique. I need to look at the work of the other ten artists in the list to see how they stack up to this idea. 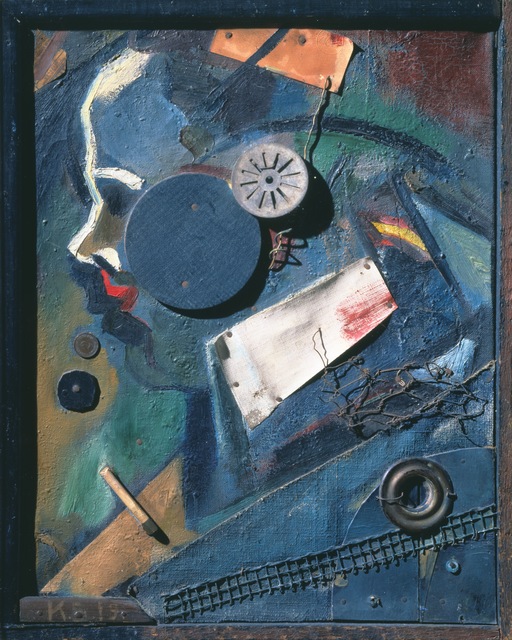 Unlike the other Dadaists Kurt Schwitters was not based in Berlin, he worked in Hanover and was exiled from Germany by the Nazis and went to live and work in the Lake District.

His work incorporated lots of different materials using a concept called Merz “The combination of all conceivable materials” this style of collage is exciting but is not really in keeping with the ideas I have for the assignment as the result ends up looking a little too surreal for the fantasy genera though the idea of making a dragon from cogs and buttons and bits and pieces does appeal to me as it is very steampunk in concept and that is another area I enjoy. 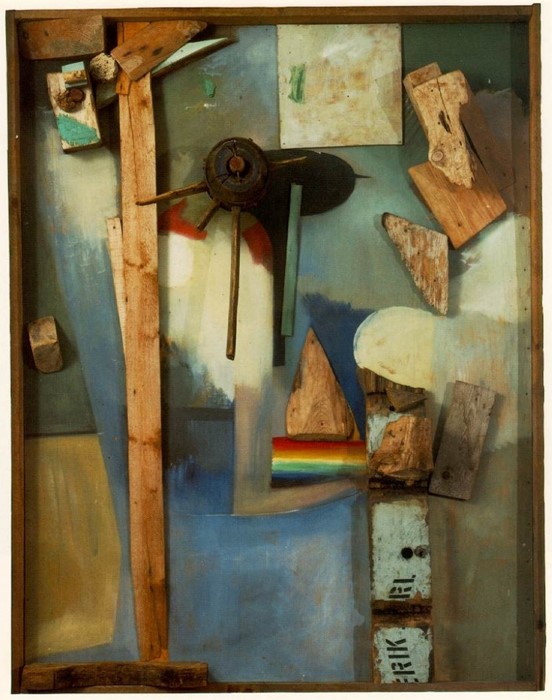 Raoul Hausmann was a close friend of Hugo Bail one of the founders of Dada and became part of the nucleus of the Berlin Dada movement. He produced many collage style artworks and also produced three-dimensional mechanical versions of his work, his mechanical head is one of the only surviving assemblages that he created.

By 1920 Hausman published two books o Dadaism and implied that Dada was at its end he became friends with Schwitters and started moving towards International Modernism.

He was also a photographer and some of his work includes photomontages of his images which makes him an interesting source for my work. 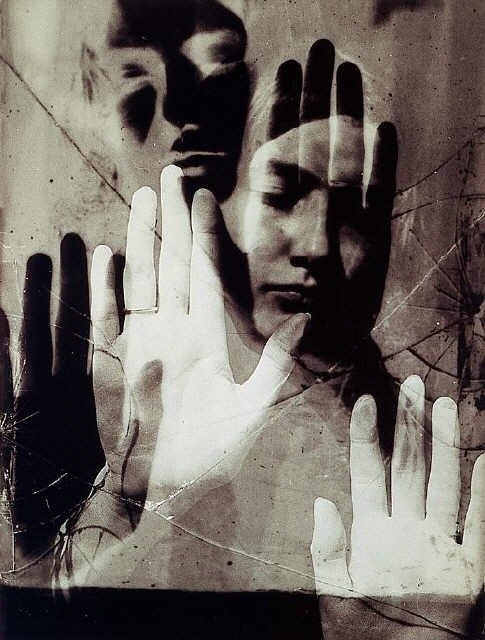 It is stated that Man Ray was informally related to Dada and Surrealist movements he was an American Avant-gard artist. He was a practitioner of photomontage and multiple exposures his work is something to study when looking at my approach to this assignment.

Man Rays work extended both to the idea of collage, and the darkroom and multiple exposures work so he spanned many of the ideas that could be incorporated into this assignment. He once said, “My works were designed to amuse, annoy, bewilder, mystify and inspire reflection.” This is undoubtedly true and though by modern standards his work is crude it was cutting edge in the day. 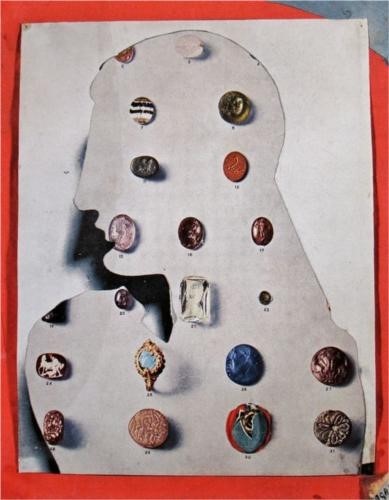 Eileen Agar was born in 1899 in Argentina she died in November of 1991 in England, she had a Scottish father and an American mother. She played a significant part in spreading the Surrealist movement into Britain in the 1930s.

Her works are social critiques with a dash of humour and irony, and she was the only British Woman t be part of the London Surrealist Exhibition in 1936. In 1937 she spent time with Picasso and Man Ray and ended up having an affair with Paul Nash.

She loved to explore the seashore and collect objects to inspire her work which was often created in the form of a collage she believed that our thoughts could change direction and that we could think about more than one thing at a time giving rise to her style of painting.

I am starting to feel like each of these artists is pointing me in the same direction and that there is something of a law of diminishing returns looking at all of them, but I persevere. 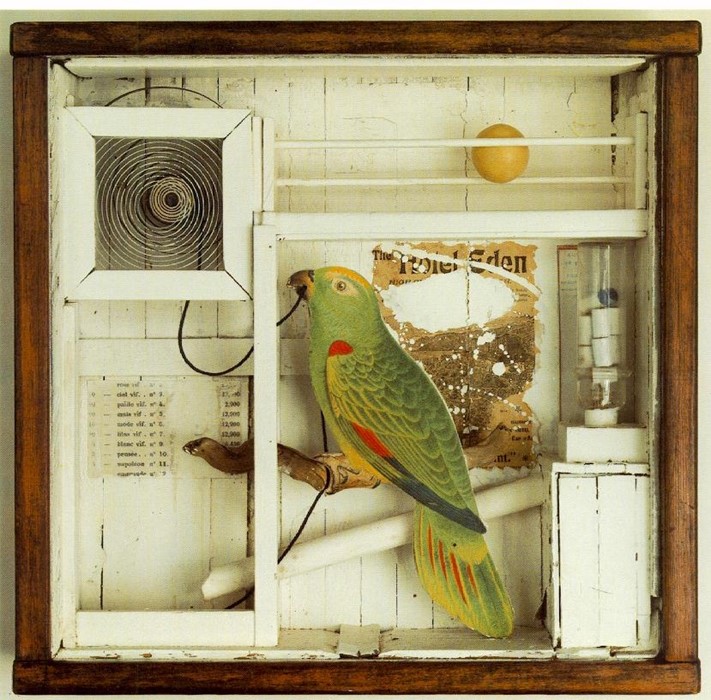 Joseph Cornell took collage in a different direction creating pioneering work n assemblage. He lived in New York and collected material from the book shops and antique shops of manhattan which he is famous for turning into intricate wooden boxes filled with all the items he found.

His style was quite different and more three dimensional it reminds me of some of the curious frames now available in artsy shops with items in a deep frame though they seem somewhat trivial compared to the original and groundbreaking work of Joseph Cornell. Searching for images of his work reveals that he prolifically produced artworks and there are a lot of examples of his work.

His style is exciting and makes me wonder if it would be possible to create a diorama in the fantasy style of Boris Vallejo it is something to think about while I study these artists before getting down to produce my work. 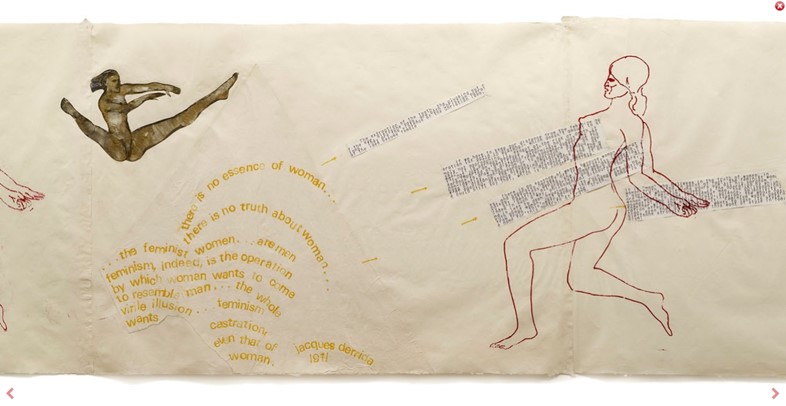 Nancy Spero was an artist who was concerned with political, social and cultural issues throughout her career as an artist. She was an activist and one of the early feminists, and her compositions were open-ended thought-provoking and ruthlessly uncomfortable in their subject matter, often in the form of a scroll or freeze. She used several techniques, including collage and what appears to be some kind of stamping or block printing. 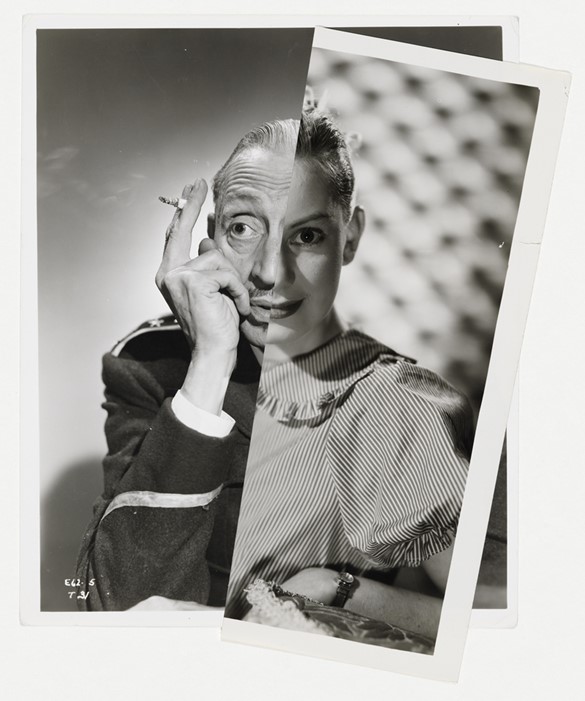 British artist John Stezaker was mentioned in the course material his work in collage involved combining two images so that they vaguely match each other but in a somewhat surreal way, this work is not the typical college of the Dadaists or the bizarre style of the surrealists. His images are mismatched but they usually form the complete person. He typically used appropriation to gather the images to create his compositions. Each image is created by overlapping two images. In some cases, he would sever the image with a straight razor cut and in others, he would cut around and make a shape or form at the boundary.

His work and style do suggest that it would be a useful method of completing part one of the assignment, and to be fair, he is sighted in the assignment text. Whether or not I pursue his work in the creation of mine remains to be seen. 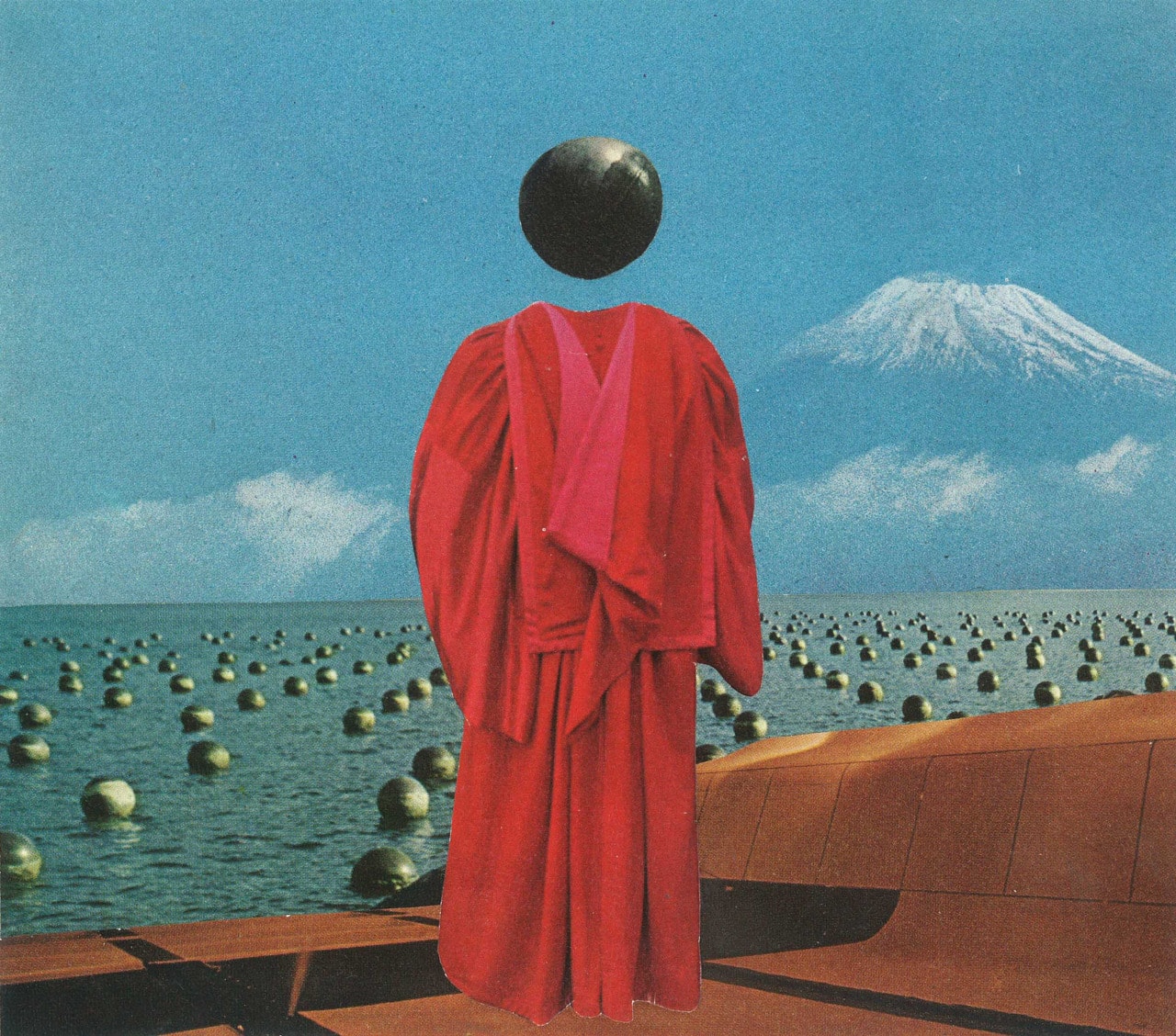 Jesse Treece is a collage artist living in Seattle. He made his first collage when he discovered a box of old magazine clippings his work is very much in the style I imagined when I conceived this idea for the assignment. He has created many images that look like the style of composition I imagine would work with my fantasy images.

Jesse Treece is undoubtedly an artist to consider while planning my work. 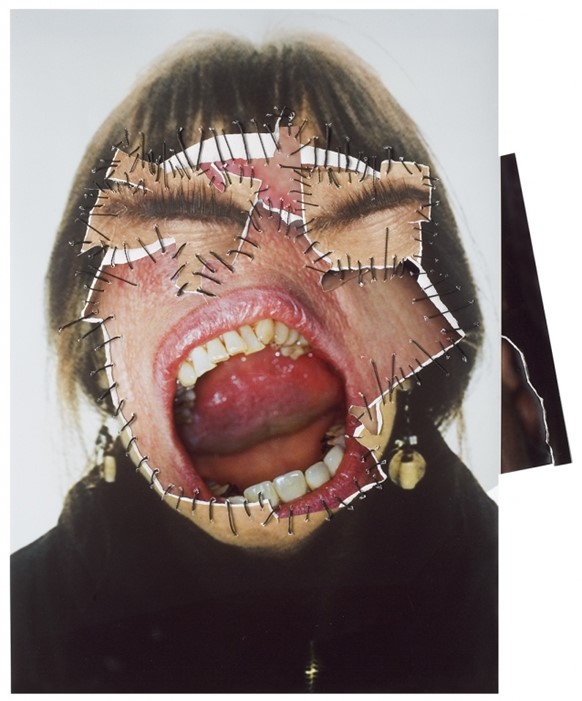 Annegret Soltau is an artist whose work is quite startling and jarring her compositions feel like something from a Frankenstein movie. This is quite literal as she joins her collages together by stitching them with black thread, this gives the overwhelming image of Frankenstein’s monster as they are composited heads and faces joined by sewn stitching.

This method has seen some popularity over the years I went to an exhibition of Andy Warhol’s work at the Photographer’s Gallery a few years ago and there were examples of his experiments in stitching images together though none were a macabre as Annegret Soltau which are almost like medical records of the experiments of a mad scientist.

I find the work very interesting its is something I would enjoy experimenting with though I wonder how appropriate it would be for this exercise given my ultimate goal.