Exercise 1.2: Background as a Context 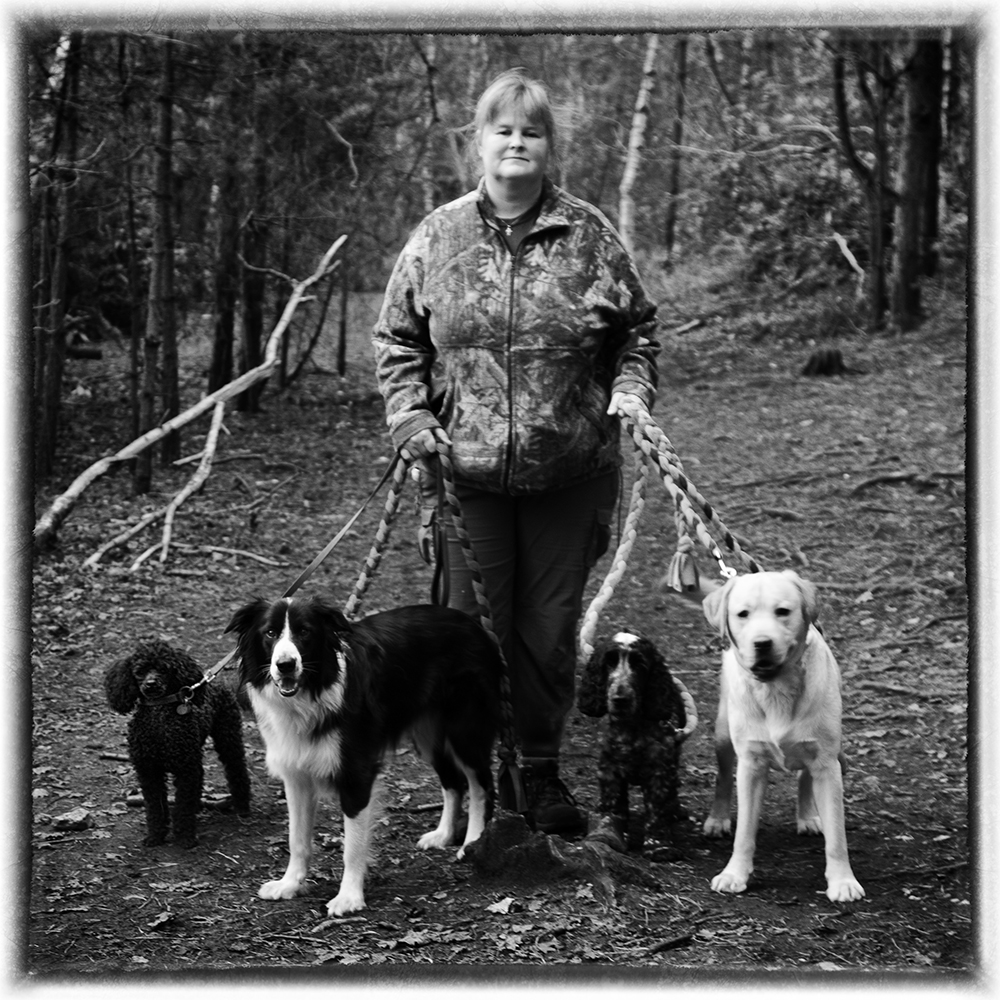 My research into August Sander (see: Research For sources) showed me a photographer who apart from undertaking a huge project set himself some very stringent guides for producing his images, I use the term Guides rather than Rules because like all good rules he sometimes broke them when there was good reason. The quote above from the encyclopedia Britannica best summed up for me the bulk of Sanders work.

I set out to produce an image that would be in keeping with Sanders collection, focusing on the typology of the subject. Nikki a good friend of mine is a very busy individual has a number of elements to her livelihood, the predominant one being the business she runs walking dogs for customers. she is seen in my image walking two of her own dogs and two of her customer dogs that are homed with her for a short break over Christmas.

In order to make this work in the sense of a Sander style image there were some key facts I concentrated on:

I shot this image in the woods behind the Mitchet Basingstoke canal center which is a haven for dog walkers, I chose this because the backdrop is in keeping with the trade of Dog Walking and the elements of the background enhance the feeling that Nikki is out for a walk in the country whiles none of the elements of the backdrop interfere with the subject. The lighting is causing a slight halo around the subject providing a separation from the background. This image was shot at f4.0 which was the largest aperture on the lens I used, the idea was to blur the background some what, though I recognize that at f4 and using an APC-Crop Sensor with a crop ratio of 1.6 the ability to create an shallow depth of field is limited without getting too close to the subject. The result I found pleasing the background is out of focus enough to separate the subject while the sense that it is a walk in the woods remains.

I encouraged Nikki to stand face on and wear a neutral expression, the result is someone doing their job which we can see is walking dogs. I shot a lot of images in order to get a shot with the dogs in line and all looking at the camera. The result is a very alert pose that tells us the dogs are eager for their walk, thus enhancing the idea of Nikki being a dog walker.

The next element of the image was to suggest the class and profession of the sitter through clothes props and gesture as Sander did. To this end Nikki is dressed in warm camos, with hiking boots all conducive with being prepared to walk dogs in the woods, she controls the dogs with thick leads, the dogs themselves being props that suggest her profession. The use of camos suggests job where green wellies and a barbour jacket may have suggested the gentry out walking the dogs, and I want to convey her doing this for a living.she is posed with both hands braced to control the dogs in a stance that suggests she knows how to do this.

In conclusion, I was very happy with the result which I processed in black and white as a throw back to Sander, the result is an image that I think conveys the class and profession of the sitter using all of the classic elements of August Sander. My only gripe with the image was that the light was rather dull which meant that using f4 the shutter speed got a little low in the woods, the image stabilizer in the lens compensated a lot but if I had used a tripod I think it would have been a little sharper, however the effect is a image that has a slightly antique effect, one which I played on by using an antique border to enhance the view.