I have long been a fan of David Bailey, I first became aware of him when I was quite young, and he started appearing on a lot of Olympus adds on the TV with the rouge character of Arthur Daley taking the rise out of him for using an Olympus Trip, The Iconic phrase “David who?” did a lot to bring his already popular name to the forefront in the 70’s. I was quite obsessed with photography since I was about 8, and in those days we did not have the luxury of the internet to find out who was doing what so triggers like this advert was the main way of finding out who was who. I was a bit young to travel to London and visit exhibitions then, I also remember seeing a documentary on Patrick Litchfield, so for a long time these were the only two photographers I knew much about.

Later studying photography, the work of David Bailey was something I looked further into and I found a style that was hard hitting and edgy. His use of high key backgrounds and single source lighting gives his work a voice that we as students can dream of. It is certain that when displayed work by David Bailey stands out as his. He developed a reputation in the 60’s such that famous people were desperate to be his model and it became a kind of status symbol.

His exhibition at the National Portrait Gallery was something not to be missed, entitled Stardust I thought it was magnificent the image of Michael Caine was printed large and hung high which gave it a more dominating presence. Each room had a theme like his work with the rolling stones or his fashion work, in total there were two rooms of fashion and beauty work showing some of the icons that have modeled for him.

In the Wolfson Gallery I actually got to see the box of pinups I had read so much about. It is inspiring to be among these images as I have admired the man for so many years and there was something far more breath taking to see the real thing than to browse them on the internet. A feeling I did not get with the images of Andy Warhol at the photographers gallery. 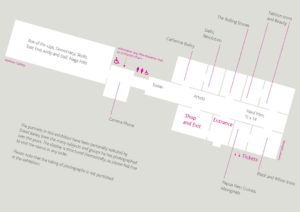