The problem with choice is that there is too much choice!

A5 asked us to look back over the module and make a self-directed assignment where you have free rein to choose a subject that relates to any of the material discussed in the course.

I decided to use a technique from my work life to sort out my head on this one, I found a new free mind mapping software and created some maps of the ideas I was having I had three attempts at dumping ideas from my head into maps and these proved to be the catalyst for the work: 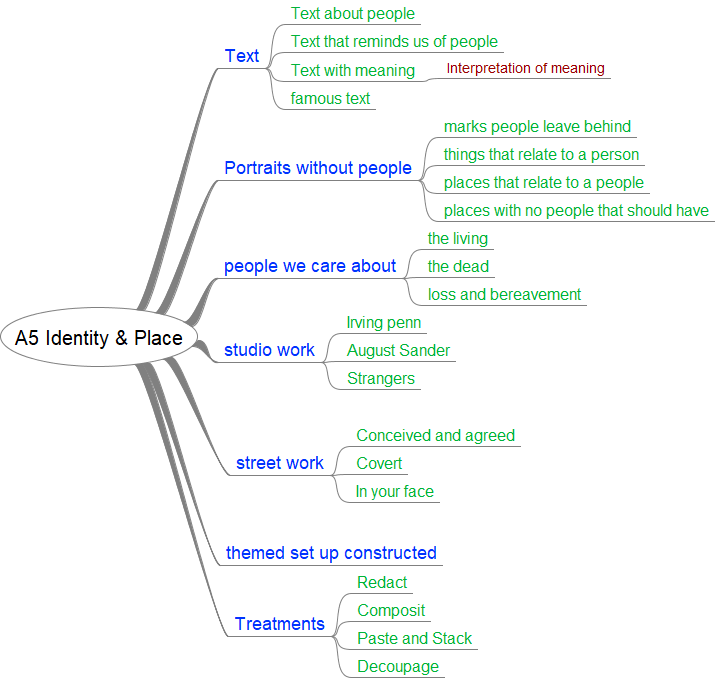 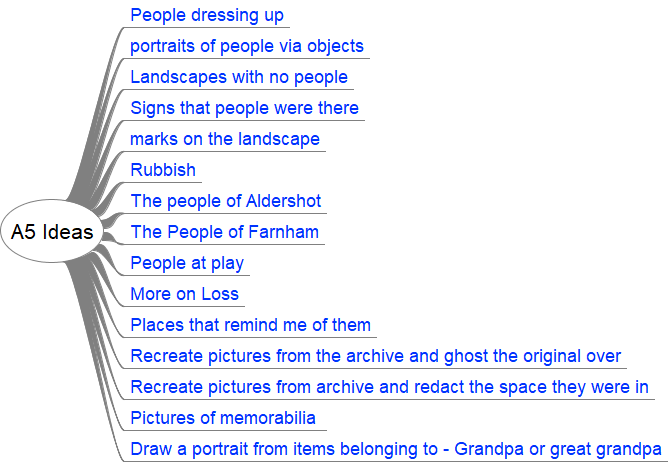 Initially I was obsessed with the idea of people creating an alternative identity by dressing up, I looked at re en-actors, cosplay, LARPING (live action role play) and I had the idea of visiting a local Joust where people dress up and live as though it were the middle ages. Unfortunately a lack of funds prevented me from doing this and I felt to do this subject justice I would need to visit lots of different events, I also thought that to really work I would need to shoot the same people in their normal work clothes, the logistics of this were far to difficult when considering my deadline so I had to drop this. It remains something I want to explore possibly in a studio using the Irving Penn Idea like worlds in a small room. This will have to remain on my to do list for now.

I had two other ideas in my play book one was to do more of the still life work and maybe use all of the old papers medals etc I have for my Grandfather and Great Grandfather, and create a series of still life or forensic style images to depict their identity. I liked this but felt it was a little too similar to the work I did for exercise  5.1 so I decided I would use the third idea and if that panned out I would come back to this.

My final idea was to look at shooting pictures of gravestones as they represent the last piece of our identity that remains after we die. there is a very large cemetery close by at Brookwood which was used to bury both the wealthy and also all the poor graves from London, I surmised that this would give me a diverse set of gravestones to explore.

After the visit I had around sixty images to edit down to the final 15 here are the contact prints for the shoot:

I selected all the images I liked which left me with around 30 images and I edited them down to the final 15 images presented in the initial submission.

I was happy with the final result so I decided to use this instead of the still life’s.